It was with great sorrow that the Tshwane Tourism Association (TTA) learnt of the untimely passing of Craig Allenby on Thursday 13 May 2021  and we are saddened to have to share this news with all of our members, friends and stakeholders. 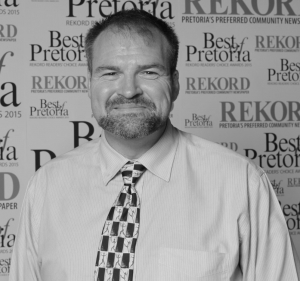 Craig’s career in our industry, and in our city, spanned over 30 fruitful and dedicated years. Beginning at the National Zoological Gardens (NGZ or Pretoria Zoo) in 1991, Craig’s passion and enthusiasm ensured that he quickly moved up the ranks to become Spokesperson for the NZG and Manager: Commercial Services and Business Development and later Acting Director. When the custodianship of the NZG moved from NRF to the SA National Botanical Institute (SANBI) Craig was appointed as General Spokesperson as well as Director: Marketing, Communications and Commercialisation for SANBI.

Craig was completely, and passionately, committed to the NZG as a place of research and learning as well as an attraction. Despite the difficulties presented in commercialising and running a government owned attraction, Craig’s dedication ensured that he persevered and he made great strides for the Zoo, and consequently our city, during his tenure, despite the challenges which placed immense personal stress on him. To visit Craig at his office at the Zoo – or attend one of the tourism industry development meetings he so graciously, and so often, hosted at the Zoo – was always a delight as Craig would always greet us with a big smile, wide-open arms and such proud enthusiasm to show us the latest baby animals born to the Zoo or special new acquisitions or improvements to the animal enclosures or general facilities. Craig was a man that truly cared, and was passionate about, his place of work. Craig would go above and beyond to support tourism marketing for the city and the Zoo by hosting countless night tours of the Zoo and other events for stakeholders of the tourism industry, often at late notice, with personal sacrifice and often on no budget – these tours were always a delight as Craig would always accompany the groups of guests, no matter how short the notice or late the time, and enthusiastically promote his special place of work and the inner city together with his team whom he was so proud of. He also passionately campaigned for the rejuvenation of the inner city, unfortunately not with much success – but not for lack of trying, and he was a solid force behind fairness in workers’ rights and animal conservation.

Craig was instrumental in introducing the TTA to the team behind the annual Attractions Africa Conference, launched in 2014, which saw their fourth conference being held in Tshwane, at the Zoo, and laid the foundation for some very strong industry relationships between our city and what is now known as the African Association of Visitor Experiences and Attractions (AAVEA), on whose board Craig served. The hosting of their 2017 conference, and the nationwide relationships formed, continue to be invaluable to our city and typical of the selfless strategic thinking that Craig was so very good at. On hearing of Craig’s passing, the words of Sabine Lehmann, President and ED of AAVEA, were “I am so sad at the loss of a man that had a good heart. He was the first person I spoke to almost 15 years ago that ‘got’ attractions” – a fitting tribute for Craig from a leader herself in the global Attractions industry.

With a background in English, as his first university degree, Craig was also passionate about journalism and was an active supporter, and member of, the National Press Club (NPC), “He had a wide circle of contacts within the media and was accessible to them and highly effective as a communicator, once winning the NPC “communicator of the year award” wrote Val Boje, current Chair of the National Press Club.

Craig was involved in the TTA from the outset, serving on the board in the early days, being an active member and mentor to newcomers, and serving on the board once again in recent years. His wisdom (and sometimes a good dose of his scepticism ;-), stood the TTA in good stead – for over two decades Craig contributed wisely, passionately and consistently and was a key solid rudder for the association contributing tremendously to keeping us on course. The relationships and networks that Craig formed between himself and other members resulted in some of the most solid foundations in our city’s tourism offering today. His dedication was evident in that he was always present for the association, even when Craig could hardly spare the time, you could be sure that he would be in attendance, providing input, support, guidance and subtle leadership consistently, over many, many years. That was Craig – dedicated, loyal, passionate, involved, and concerned and always wanting to make more of a positive contribution.

I recall that, in my early days when I first began to interact with TTA (known as PTA then), Craig was a mentor to me, guiding me through the intricate networks of the work we needed to do. He was a friendly, smiling face who never said no and always made time for you. Craig introduced me to countless brilliant and wise colleagues across his various networks, he shared their friendship with me and he always made the time to share his own knowledge and provide assistance. I like to think that we were not just colleagues but that we had become friends. He was someone whose company I very much enjoyed, whom I looked up to, who I trusted for advice and whom I cared about – I am sure that many of our colleagues feel the same – and I only hope that I contributed to him a fraction of what he gave me over the years.

My only regret is that we did not have more time with Craig, the loss of Craig is a great loss for our industry, and for our city tourism fraternity, and is like the loss of a family member to the TTA.

Rest well now our friend, it is well deserved, you will be terribly missed.

With respect, and thanks,
Bronwen Cadle de Ponte (ex TTA Chairperson) on behalf of the team at TTA

The African Association of Visitor Experiences and Attractions (AAVEA) represents the interests of visitor experiences and attractions, raises awareness of the contribution they make to the broader tourism industry, enhances discussion and co-ordination among visitor experience and attraction professionals, and hosts an Annual Conference that provides education, networking, and collaboration opportunities.
Go to Top